Which Spanish stereotypes are true ?

Spanish stereotypes are numerousous. We will see which one are the principals, and if they are true or not !

The majority of Spanish people never danced flamenco. It is a difficult danse and they can't improvise it, they usually take classes in a dance school and practice a lot. Moreover, flamenco is more typical in Andalucia, the South of Spain, and in particular in Sevilla. However, you can see flamenco shows almost everywhere in Spain. 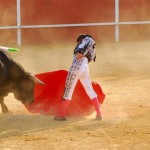 Corridas form part of Spanish culture since a long time. Nevertheless, not every Spanish go and see corridas necessarily. Opinions are different about it, functions of who you ask, some people will say that it is a sport, other that it is an art, or a barbarity. Becoming torrero is not permited to everyone, they need a lot of training years in order to be able to beat a bull in bullring (plaza de toros). It is funny to see that sometimes dead torreros wifes appeared more on the television than some politic figures. However, corridas popularity went down, only 25% of Spanish people are going regularly amd young people prefers watching a football match. Olé !

Their feeding times are put back two hours or more compared with United Kingdom. For the lunch, they eat seldom before 2.30 pm. If you wonder how they can wait so long without eating it is because they cheat a little. Around 11am, they take the "almuerzo", a small or big sandwich. For the dinner, they eat around 10pm, 11pm, but everything depends on the families, on each habits, etc.

Spain attracts a lot of young european because of its parties, bars and discotheque. They rarely go out before midnight, and they have fun until late in the night. The botellon is well-known in Europe and it is very widespread. It is for young people a way to meet knew people and to be drunk cheaper. Botellon consists in a meeting in the street, drink alcohol bought a few hours ago, talk, chat up, smock and take drugs for some people. It is not for nothing if Spain is the first european country for alcohol comsuption.

Moreover, in almost all the cities or villages, there are parties once a year, in order to celebrate a patron saint. those parties are very coloured and some people wear typical fancy dresses during a few days.

If Spanish people had 35 hours per week like in France, they will may have enough time to take a nap ! Their day's work is longer and the ones who take a nap are probably the retired. May be Spanish people are not the lazy people... 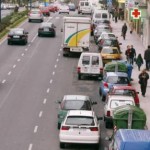 This cliché is most of the time true. Instead of slow down when the traffic light becomes orange, they speed up. When the pedestrian traffic light starts to flash on and down in order to advise people that it will be soon read, Spanish people start to move forward. Advice for pedestrian : always check before crossing the road! Hopefully, all Spanish people are not like this. Another funny aspect of the Spanish driving way is to park in double row. In front of the school exit, it is impossible to park, so instead of looking for a place, they park in double row. 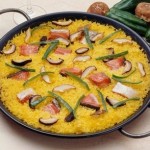 Paella is very common and you can find restaurant that serve you paella, almost everywhere in Spain. It exists a lot of different varieties and if you want to try, it is better to go to Valencia, where this dish was born. Spanish people don't eat it everyday, and don't know how to cook it. However, during family week ends in their village they will cook a paella instead of a barbecue as in some countries in Europe. 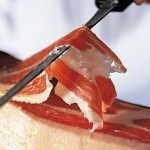 Spain is well-knowm for her tasty ham. Spanish people eat a lot of ham. Chorizo and sausage are also common. Some families buy the entire ham and eat a little bit everyday during a few months. Spain tries to export more and more ham in others  European countries and also in Asia where pork is an often used food. 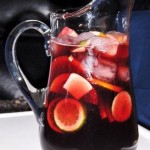 Sangria is widespread in Spain but not as much as we believe. First of all, a single sangria glass is rare, mostly they ask for a carafe (jarra) in order to share with their friends. Spanish are also very fond of beer and wine.

Foreigners are often shocked, Spanish people speak louder than the rest of European people, except Italian people may be ! At least when they come, you can't miss them.

Spain is the country where there are the most sunny days in Europe. But her geography is very varied and climate change from an area to another. Raining days aren't seldomn the North of Spain. And for example is snowing at the moment in some areas in Spain.

Spanish people count on the family, more than people in others countries. When someome in the family has a problem, they normally support him psychologically or financially. Children can stay a lot of time in their parents' house.

They are very proud of their country, and many more of their "tierra", the area where their family comes from. Over there, everything is the best, the food, the wine, the landscape, ... The different languages in Spain, consilidate this strong area identity. Except from the Catalan, languages as Valencian ou Galician are less important.