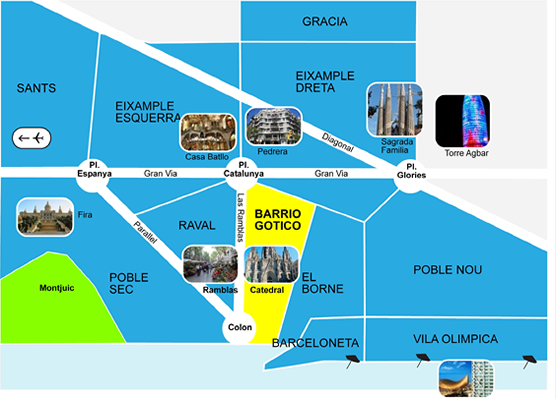 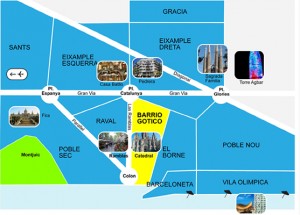 Barcelona is organized in about 10 districts. The division of the city has historical roots which dates back to the time when the city had an indipendent City Hall for each district, that, even after the annexion to the city of 19th and 20th century, continues preserving its own identity and structure.

A short presentation of the districts will help you if you are looking for a flat and also to enjoy the different feelings offered by the city.

The most central district is certainly Ciutat Vella, the most famous area for the tourists, including the Gothic Quarter, Las Ramblas, the Born, Raval and the Ciutadella Park. It’s the beating heart of Barcelona and there you can find the majority of monuments and historical place, such as the Cathedral, the Palace of Catalan Music, and the Bouqueria Market.

The fascinating Gothic Quarter is the district that uses to be the most appreciated by who is visiting Barcelona for the first time. Its gothic architecture, its bares and the alleys full of ancient shops give a pacific and bohemian portrait of the city. We advice you to enjoy a clara (a mix of beer and soda) by sitting at a cafè, or to have a “shopping tour” in the stores of this area, even if not always cheap.

The Ramblas. Classic destination of “mainstream” tourism, the Ramblas are the first place where you will be in. Always crowded, full of buskers, stands of flowers and magazines, are the symbol of the city and bring to the sea everyone comes from Plaza de la Catalunya. 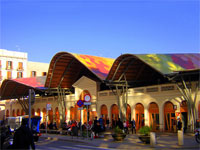 Born. Placed in the neighborhood of the famous market of S. Caterina e in the homonymous market of the district, the architectonic flagship of this area is for sure the Cathedral of Santa Maria del Mar, become famous thanks to the book La catedral del mar, written by Idelfonso Falcones. Passeig del Born, a little Rambla with a lot of nightclub, Carrer Montcada and its Picasso Museum and the Zoo inside the Ciutadella Park are remarkable too. 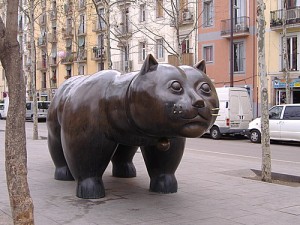 Il Raval. The Raval area is one of the most controversial place of Barcelona. Here, in fact, lives a big community of immigrants from Pakistan and other countries. For this reason, this is a district teeming with life, both on day and night, with a multicultural character that, sometimes, brings it the bad reputation of dangerous area. Is one of the best place to eat something "different" and discover corners of the city ignored by the most. Walking here is quite interesting, thanks to the closeness to the ancient building of the University of Barcelona (UB), the Barcelona Museum of Contemporary Art (MACBA), the Botero's cat sculpture and the recently inaugurated Filmoteca. 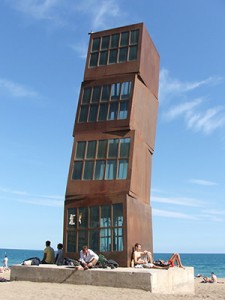 The Barceloneta is the closest district to the beach. Always crowded of tourists, it starts by the statue of Christopher Columbus and is the perfect place to have a walk and warm up to the sun by the sea.

The Eixample is the modern part of the city and offers a lot of shops, restaurants and is a clear example of the modernist architecture including the first works of Gaudì: Casa Battló and Casa Milà.

Gracia is really famous and maybe is the part of the city that, more than others, is mantaining the original morphology of independent City Hall because, until the 19th century, has been a little town separeted by the urban nucleus of Barcelona. Chosen by a lot of universitaries to live in and to go out on night, Gracia holds a trendy nightlife, a traditional style of life and one of the jewels of the city, the Park Guell of Gaudì. In Gracia, on mid-august, is celebrated one  one of the largest festivals in Barcelona, similar to a Carnival. 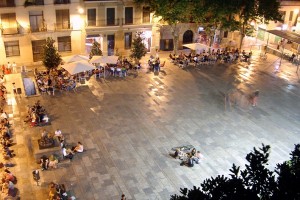 Sants, close to Plaza Espanya, Montjuic, Poble Nou e Poble Sec, used to be considered more marginal, maybe because are not full of monuments as well as other parts of the city, but are anyway well linked to the city centre. It is easy to find here local people and, sometimes, the students choose to live there because the price of rent is not too expensive.